When thinking about Ohio, specifically Portage County, cheese is not the first thing that comes to mind. Lush green pastures of the various farms, quaint small towns that appear frozen in time, and narrow dirt roads leading to who-knows-where dot this beautiful countryside. Yet dotted throughout the county are artisans yielding their craft and producing fresh, sweet, and often surprising goat’s milk cheese beyond compare. One such artisan is Jean Mackenzie, founder and President of Mackenzie Creamery in Hiram, Ohio. 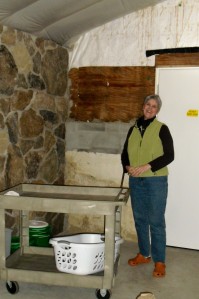 I met Jean at her home, Stonewall Farm, early this spring. Located forty minutes southeast of Cleveland, this storybook farm appears untouched by time. In actuality, the whole house has been renovated and the barn is fairly new, yet Jean and her partner Jim Zella have remained true to the original architecture with a few embellishments. One addition is the two thousand foot wall surrounding the main house using stones found on the property, which gives the farm its name.

How did Mackenzie Creamery come to be? HM

“I was working for the local land conservancy heading up their real estate division. Loved it, thought I would do it forever. Then I took a vacation. Headed to Pennsylvania and took a cheesemaking class. Came back and thought that was really interesting. Six weeks later, I signed up for another class. It was a three-day course with only 12 students with Neville McNaughton who was the instructor and is now my cheese consultant. I was on a very fast pace and got licensed in four months which is unheard of. (the typical licensing time is six months to a year).”

“Before we were, licensed we met with ODA (Ohio Department of Agriculture). Anybody who is thinking of doing anything that is regulated, before taking the first step, contact that agency.” JM

By October 2007, Jean became the second licensed cheese producer in Ohio. By January of 2008 Mackenzie Creamery was selling its goat’s milk chevre at markets and stores throughout Ohio.

As with many creameries and dairy farms in Ohio, Mackenzie Creamery is an all girl club. Even the goats and chickens are all female.

So, what’s the story with the chickens and the goats? HM

After a stroll about the grounds, Jean and I moved on to the barn where all the artisan cheeses are made.

What is the difference between artisan and farmstead cheese? HM

Inside the production room, Jean explains what the women are working on.

“We’re bagging the cheese. The curds develop overnight and we want it to hit a particular pH within a certain time frame. At the end of the day when it’s drained quite a bit then they hang it and the whey is collected into a stainless steel tub and then pumped into a holding tank and a local farmer will feed it to livestock and extra is sprayed as fertilizer. It’s completely sustainable. When we talk about sustainable, it isn’t just sustainable food systems. It’s sustainable inter-dependents of farmers, and cheese makers. We all are supporting each other, business to business, farm to farm.”  JM

The cheese is set in coolers with muslin, which pulls out even more moisture. Once the cheese is set, it is hand rolled, weighed and put into wrappers. The farm recently acquired  an auger stuffer which is calibrated to the exact weight for the cheese wrappers to be filled.

Mackenzie Creamery  is continuously improving with both equipment and product storage. New machines, larger storage as well as a new cheese cave for creating aged cheese are in the works.

The cheese cave has stones used from around the property. The goal is to produce a banon using grape and chestnut leaves picked from local farms.  Banon is usually made with raw milk, however since it is only being aged for 30 days, this banon will be made with pasteurized milk.

Triple-cream brie  and possibly a crottin are also in being considered additions to the product line.

Jean is a master at creating exciting flavors for her chevres. From the spicy Sweet Picante to the dessert-inspired cranberry-cinnamon-walnut, there’s a taste for any preference. My personal favorites are the black truffle which has a hint of lemon and the Sweet Fire that incorporated black raspberries and Habanero. It shouldn’t work, yet it does in a burst of heat that is quickly tempered by the sweet berries.

Where do you come up with such amazing combinations? HM

“I am a gourmet cook. I love to cook. I have hundreds of flavor ideas floating around in my head. We do a seasonal, a toasted pumpkin, and we are experimenting with flavors that have yet to come out.”

“The sweet and the hot…it just came to me. It was just like, I gotta do that. When you get really neat idea, it’s just inspirational.” JM

Have there been any happy accidents or total flops? HM

Jean laughs a bit and shakes her head in the negative.

“I have this ability to mix ingredients in my head and taste them. I have had that ability always. I honestly believe it is a gift.” JM

Oh, what a gift it is. Mackenzie Creamery has won seven national titles including Best of Show, Reserved Best of Show, two First Place and one Second Place award at the 2007 American Dairy Goat Association’s National Cheese Competition held in Ft. Collins, CO. and third place at the 2009 American Cheese Society Competition in Austin, TX. Most recent, Mackenzie Creamery was voted by the editors of Cleveland Magazine as the Best Goat Cheese for 2009

Mackenzie Creamery chevres can be found at most upscale food marts throughout Ohio.

One response to “Interview: Mackenzie Creamery”