When I order cheese I usually ask the cheesemonger what’s new and interesting on the shelves.  Since I do most of my ordering by phone or email I have to trust my mongers and take chances. Such was the case when I ordered Bleating Heart’s Lucky 13.

I had heard of Bleating Heart’s Fat Bottom Girl from Jeanne Carpenter of  “Cheese Underground” and at the time, Seana Doughty (owner and cheese-maker of Bleating Heart) was only making the one cheese.  Sadly, it was all sold out by the time word got around so the rest of us cheese lovers were expecting to have a long wait till the next batch arrived on the scene.

Imagine my luck (pun intended…sort of) when placing my order with Cheese Plus, Sam mentioned she had something new from an up and coming cheese maker. Lucky 13 (formerly known as Lot Zero) is almost the same formula as Fat Bottom Girl, yet has an extra enzyme added and is aged a bit longer. Always intrigued by farmstead cheeses (cheese made on the farms where the animals are milked) I asked to have some put in the order.   Seana Doughty explains how this cheese came to be: 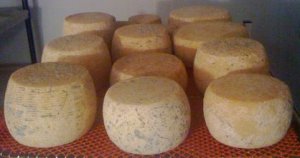 The cheese was originally dubbed “Lot Zero Reserve” because I only made one batch early in the season. However, I decided to make another batch but made a minor tweak in the amount of a particular enzyme and aged it a little longer . That batch of cheese turned out to be even better – and it was batch 13 – hence the name “Lucky 13” since I felt that was the ultimate formulation/recipe for how I wanted the cheese to taste. The cheese was completely handmade, only in small batches of 20 to 25 gallons of fresh raw milk from sheep who freely grazed on coastal pastures 45 minutes north of San Francisco. Lucky 13 is a small format cheese, just a few pounds each, with a gently cooked curd that is lightly pressed by stacking one cheese on top of another and alternating over a few hours before the cheese is salted via brining overnight. The cheese was then aged for 5 months. During this time, I washed the rind with a brine solution and turned the cheeses several times per week in the beginning, then tapered off after a couple of months once it developed a hint of orange from the B. Linens. After that, I turned the cheeses once or twice a week until sending them out into the world.

The fresh buttery texture of this cheese is subtle yet pleasing.  The edible rind gives the cheese a bit of an earthy zip, perfect for a spring cheese.  Pair with a petite syrah and some fig compote and it’s a perfect sweet/salty treat for any occasion.

Sadly, Bleating Heart is out of stock of all cheeses until this summer, but I encourage those interested to get on a wait list. Due to small yields, this cheesy goodness won’t last.